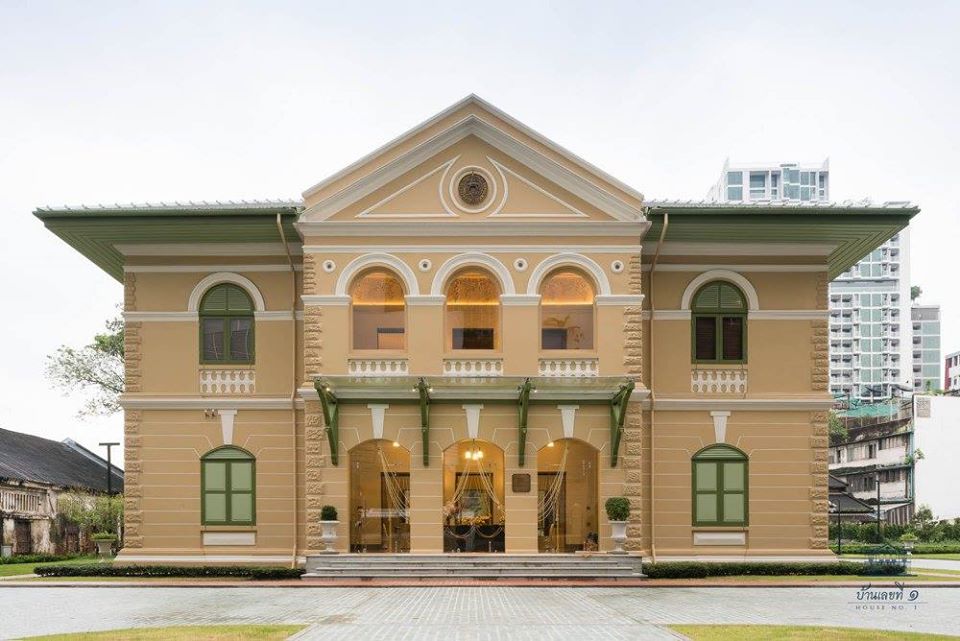 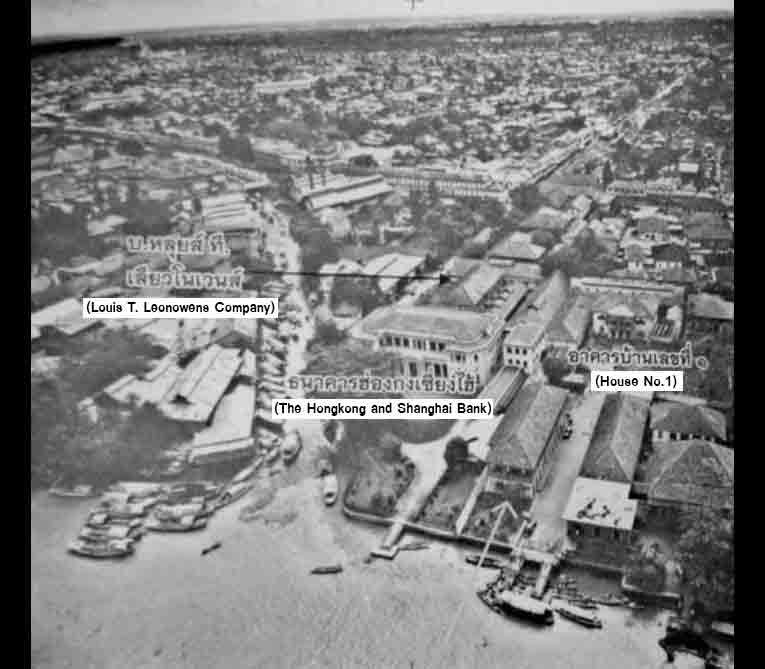 House No. 1 on Captain Bush Lane has an interesting history!

The plot of land House No. 1 sits on originally belonged to Wat Kaew Jaem Fah but it was offered to sale to the Privy Purse for 16,000 baht on 26 December 1913 because foreign newcomers were ruining the neighborhood! Since its founding, the temple had supported itself by holding Buddhist rituals and ceremonies, sending its monks out to receive alms and holding funerals and cremations.

When the Bangkok port boomed with foreign shipping, foreign businesses and shops moved in and surrounded the temple, discouraging Thai followers from participating in temple activities as before. Temple revenue dropped!

To make matters worse, the fussy foreign consuls complained of the smoke and smell from cremations and the frequent ringing of the temple bell! As a result, the temple was forbidden to host funerals, and the temple made its own complaint, directly to King Chulalongkorn’s nephew.

A win-win situation was worked out. The Privy Purse bought new land on the recently created Sri Phraya Road and swapped it for the temple land which evidently had good commercial potential among the increasing population of Western foreigners.

King Chulalongkorn (Rama V) bestowed the land to his consort Princess Saisavali Bhiromya and her children but requested the Privy Purse manage it by dividing it into 2 plots for leasing.

The first plot is where House No. 1 is located. The house built there was regarded as the property of the Privy Purse so the Bangrak District (former Si Phraya District) honored it as “No. 1”. Wat Kaew Jaem Fah duly moved and built a new compound on Sri Phraya Road where it can be found today. 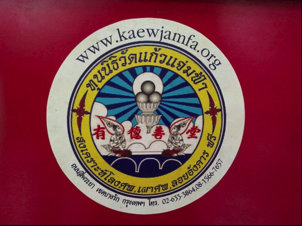 In fact, the Privy Purse developed the land swapped with Wat Kaew Jaem Fah by building 4 large buildings for rental to foreigners. They were fully occupied by 1932 but only House No. 1 remains. It had a magnificent view of the Chao Phraya River and was easy to reach by boat. (Note: Capt. Bush Lane was built later).

The building was European neoclassical architecture, which King Chulalongkorn favored after his first royal visit to Europe. The house had two storeys, built with load-bearing walls. with a central pediment at the front. The diamond-shaped tiles of its hipped roof are reminiscent of the style of its time. The walls were painted in yellow and the windows in olive with white frames. The doors and windows had beautiful roman curves. Interior decoration included groove pattern walls in the same manner as European masonry upstairs and the floor was teak. Downstairs, the floor was laid with imported tiles and supporting posts were decorated with stencil paintings of beautiful western flowers.

House No. 1 became the residence of Felix Auguste Grassi, son of the famous architect Joachim Grassi who King Mongkut (Rama IV) hired to design so many of the heritage buildings we cherish in Bangkok today: Ministry of Justice, Ministry of Foreign Affairs, The Naval Shipyard, Wongburapa Pirom Palace, the Defense Ministry, Wat Nivet Dhamma Prawat at Bang Pa In, the Customs House. Joachim had to flee the country in 1893 because he was too closely involved with the French attempt to destabilize the kingdom. He left behind many beautiful building and a lucrative business empire: Grassi Brothers & Company, Siam River Steamboat Company, and Siam Lands, Canal and Irrigation Company for the development of the Chao Phraya basin. Joachim’s son Felix carried on in Bangkok although his brother Eugene Cinda Grassi returned to Paris too. (He came to be known as the “Siamese Composer” who influenced the Ballet Russe.)

The next tenant was a French corporation, Societe Francaise des Distilleries de l’Indochine (SFDI), which had a monopoly on production of alcohol for France, Indochina and the rest of Asia, including Siam. SFDI’s chose to establish its Bangkok office in House No. 1 t because the European community had established itself in Bangrak area. It had Bangkok’s first paved road (“New Road” or Charoenkrung Road), the Embassy of France, the Grand Postal Office, Bangkok’s first customs house, and many other institutions required for business near the turn of the century.

So it remained until 1958 when the Crown Property (former Privy Purse) took it back and gave it to the Ministry of Industrial Works, which in turn leased it to Maharashtra Distillery until 1994. By that time it had lost is splendor and was used as dormitory space to house its workers.    It became dilapidated and became uninhabitable and was finally abandoned. 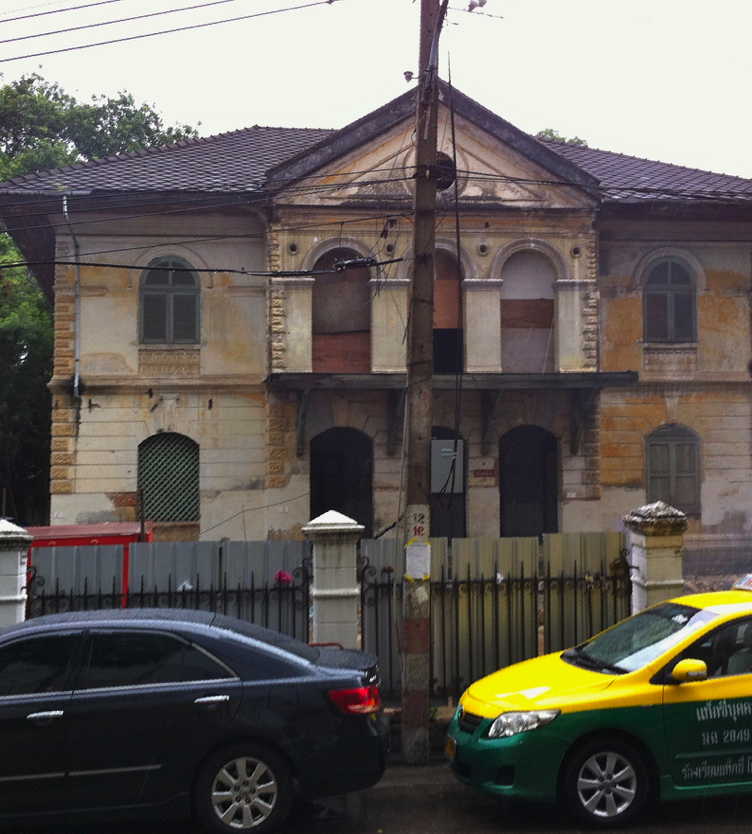 In 2012 to 2016, Crown Property Bureau saved the building from dereliction. First the building was painstakingly raised. It had remained at its original level despite the elevation of the roads surrounding it. The construction team did this by burrowing under the building and pouring a massive slab of concrete under it. Then a huge team of workers was assembled to raise the building using manual lifts (similar to the jacks used when changing a tire). When the whistle blew, workers would simultaneously use the lifts to make a slight rise– and they continued to do so day after day after day! A feat that left the neighborhood amazed!

Then the exterior and interior of House No. 1 and the beautiful lawn were restored to its original glory. 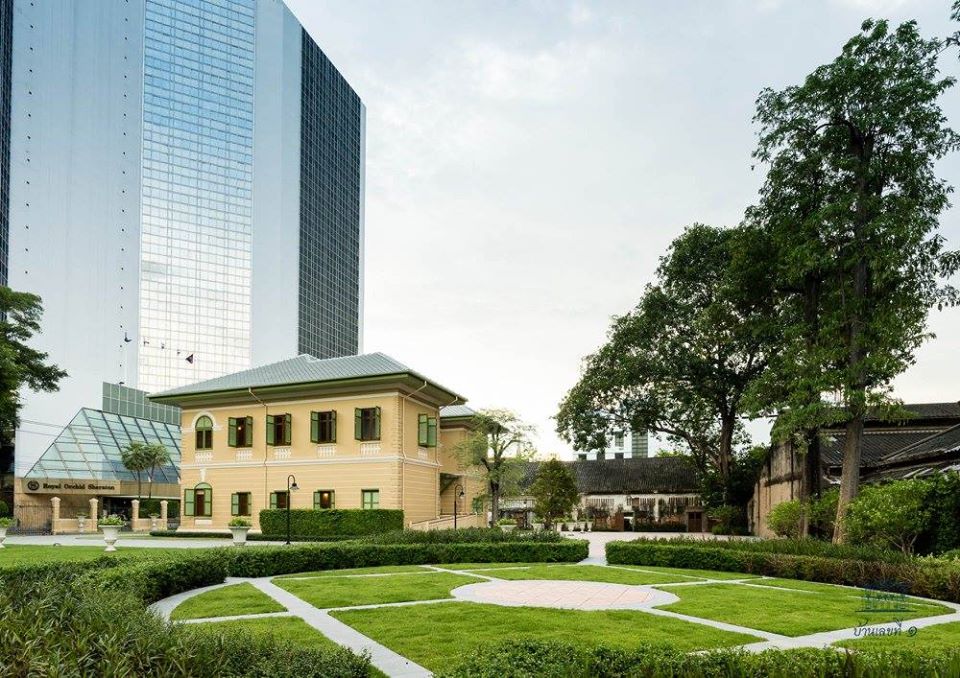 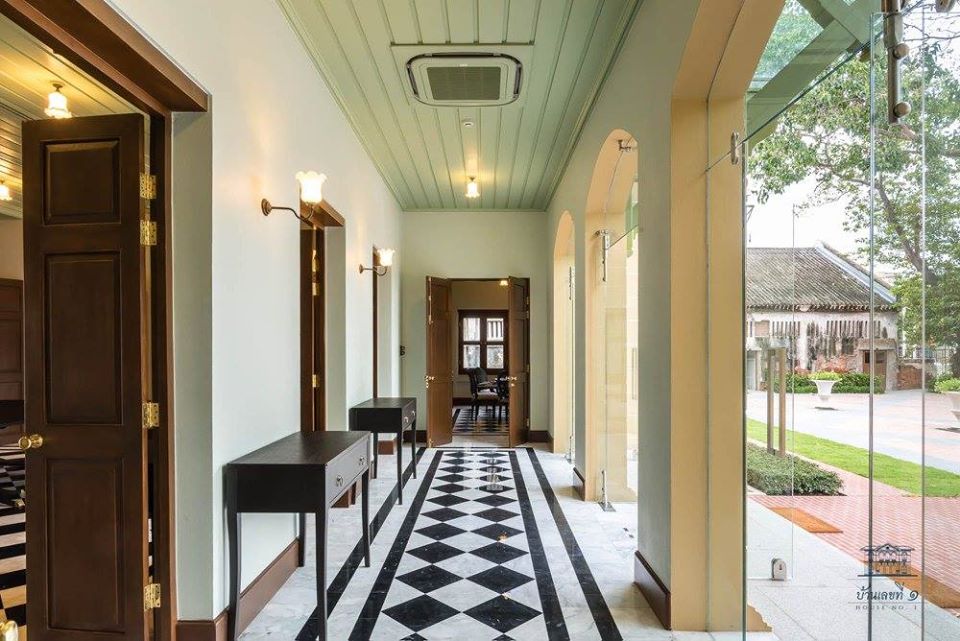 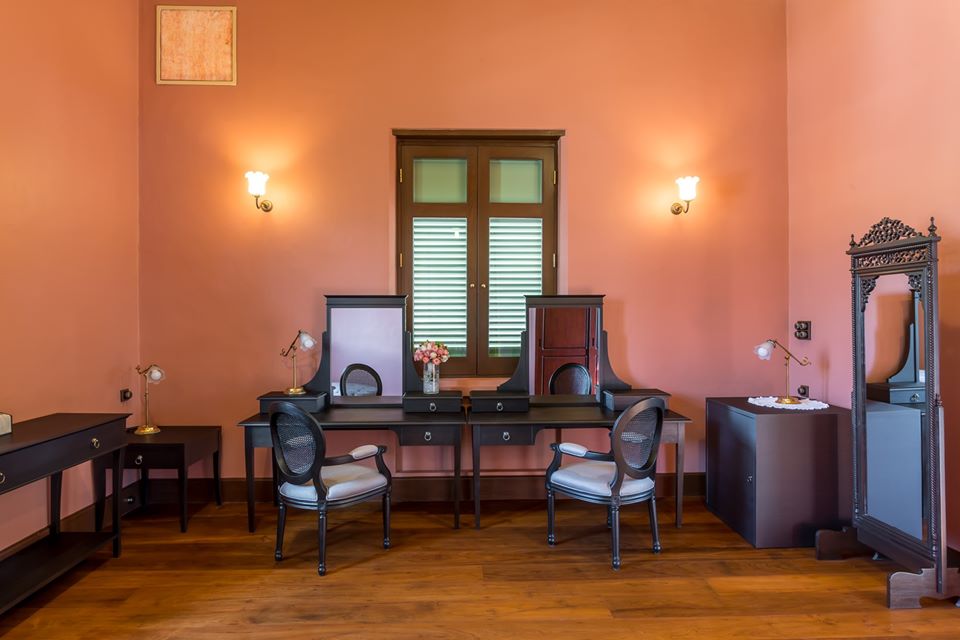 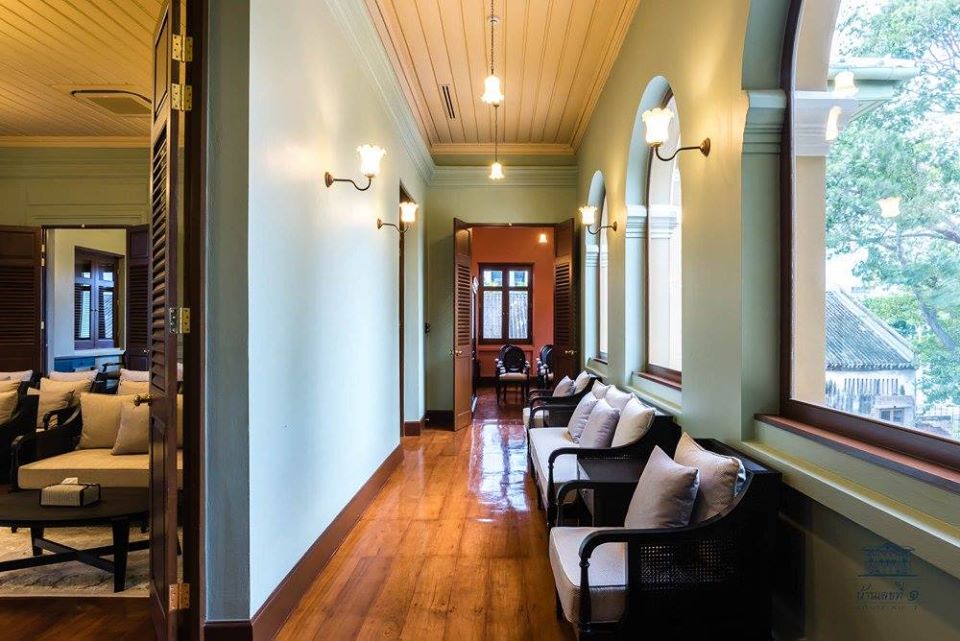 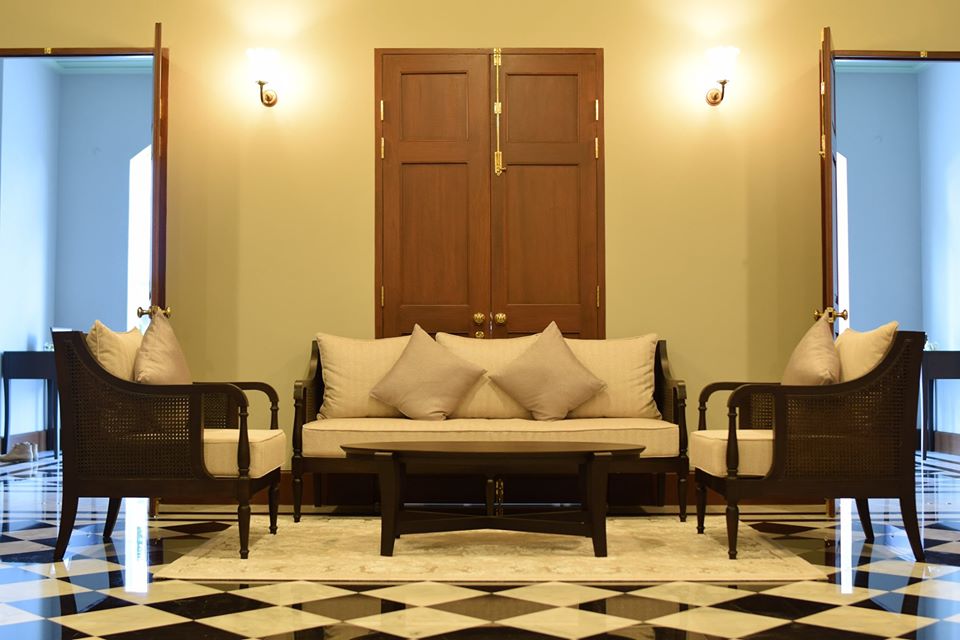 Due to its architecture rarity, House No. 1 has been listed by the Department of Fine Arts as an ancient monument. It is generally not open to the public on a daily basis but it is available for private booking. The house re-opened to the public in 2017 as an elegant romantic venue for special events such as corporate meetings or society weddings. Bookings are welcome and lavish decorations and even catering by Michelin star chefs are offered in the array of private function packages.